Thakur Sahib Vibhoji Ajoji Jadeja of the Jadeja clan founded Rajkot in 1620 which was previously a part of the Ghaznavid Empire ruled by Mohammad Ghaznavi, and Muzaffarid dynasty whose ruler was Mahmud Begada before that. Rajkot was named in honour of its co-founder, Raju Sandhi. Thakore Sahib Mehramanji I Vibhoji, ruled after Thakore Sahib Vibhoji Ajoji who was pivotal in the suppression of the Kathi tribes with the Mugha Empire Imperial forces.

He was rewarded by the Subedar of Gujarat, Azam Khan, with an expansion of the borders of Rajkot. Thakore Sahib Bamanioji Sahibji and Thakore Sahib Mehramanji II Bamanio, his son, were skilled and excellent soldiers who seized Rajkot along with a few villages from the rule of the Nawab of Junagadh and estabished their control over the domain of Rajkot and its nearby villages up until 1720. 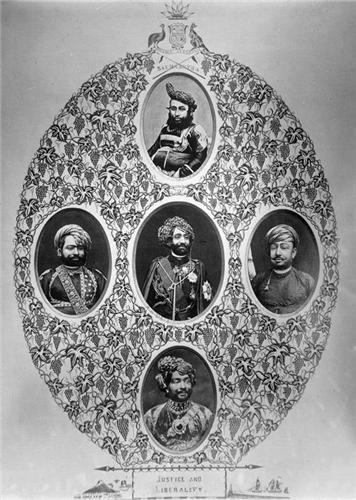 Masum Khan of Junagadh's Nawab conquered Rajkot in 1720 and renamed it to Mausamabad. He oversaw the construction of a fortress in 1722, built primarily to protect Rajkot from attack of other rulers.

There were a total of eight entry gates to Mausamabad with iron spikes on their outer side  - these were called Sardhar Naka, Kotharia Naka, Raiya Naka, Bedi Naka, Nava Naka, Bhichari Naka, and Pal no Darwaj.

The debris of fort wall are still present in the bastion in Ramnath para area. Masum Khan ruled for over a decade until he was defeated by Thakore Sahib Ranmalji Mehramanji in 1732.

In 1982, Sir Robert Bell Booth, who served as the chief engineer for the British Agency, renovated Bedi gate and Raiya Naka gate and constructed the three storied clock towers, which are present to this day. 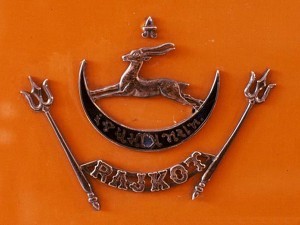 Thakore Sahib Ranmalji Mehramanji conquered Masumabad in 1732 and reinstated its name to Rajkot. He was succeeded by his successor and son, Lakhoji I in 1746.

The family accepted British protection in 1818 and subsequently the capital became the headquarters of the British Political Agent, and soon developed into a modern town that was an important centre of education. 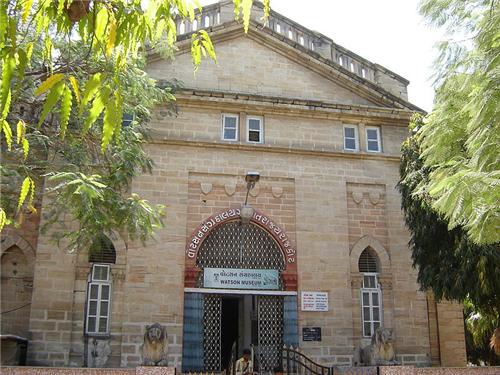 Under the British rule, the state became a popular venue for meetings of various political, cultural and intellectual organizations hailing from all over India. The Saurashtra Agency was founded by the British East India company founded in an attempt to moderate all the princely states. Many impressive colonial buildings and educational institutions were constructed under the British rule, such as the Watson Museum, Connaught Hall and the Rajkumar College.

Mahatma Gandhi spent early years of his life in Rajkot when his father was employed as a Diwan to the then King of Rajkot. Gandhi embarked upon a fast in order to form a people’s council that could eventually lead to the liberation of people of Rajkot at Rashtriya Shala in 1939. After World War II concluded, the state merged with its neighbour to form the United State of Saurashtra in February of 1948, which resulted in Rajkot becoming the capital of the State of Saurashtra.

After India’s independence from the British rule, Rajkot became the capital of the State of Saurashtra from April 15, 1948 to October 31, 1956 before merging with Bombay State on 1st November, 1956. The city of Rajkot was officially incorporated into the state of Gujarat on 1st May, 1960.
Rajkot boasts of not only a rich heritage and history, but is credited with being one of the fastest growing cities today in India and world over.